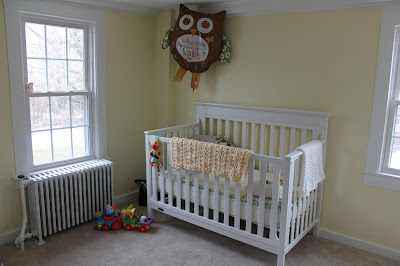 At the beginning of March, we added a new occupant to our home... our son B. Luckily for us, the carpet was installed in his room a mere 3 days before he was born, and his crib and other furniture were put together and set up only 2 days before.  Talk about cutting it close!!

The last week before he was born was a whirlwind of renovating. Here I was, 9 months pregnant, and tired exhausted all the time. Add on to that two soon-to-be first time parents who were going crazy trying to make sure everything in the house was perfect and that we had every single thing we needed, and it was a crazy week. I had a list of everything that had to be done before the carpet installers came on Friday. Paint touch up, caulking, cleaning, paint the ceiling, new electrical outlets, etc. As long as I managed to get one thing done during the day, and R got one thing done at night, we would be ok. And what do you know! We made it! Friday came along and everything was perfect and ready for the carpet.

The carpet went in without any problems and looks great! As soon as the installers were out the door, I was starting to move baby stuff in! The planner in me had been freaking out! The baby could come any day now, so I had all of his clothes and blankets washed and folded in the Guest Room. His changing table was put together. The dresser was painted. All I needed to do was move everything in. That Friday night was so fulfilling! I was waiting until after he was born to do some decorating, but my plan was to sew the curtains the following Tuesday (although, then he decided to change things up on us and I ended up in the hospital on Tuesday, and he was born that night!). 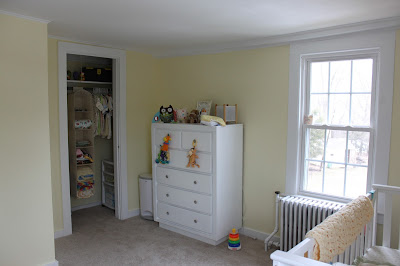 Posted by Ryan and Shelley at 5:44 PM

Email ThisBlogThis!Share to TwitterShare to FacebookShare to Pinterest
Labels: Back Bedroom, flooring